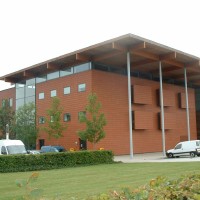 Last summer we were very privileged to host our Raspberry Jam in the Cambridge Computer Lab and the lab itself has a fascinating history.

In 1938, the staff and students of the Anatomy School at the University of Cambridge moved to a new site, vacating their building in the heart of the city. Among the incoming occupants who took their place were founding members of a brand new service, which the University had only just approved. This “Mathematical Laboratory” began life as a two-man team, confined to the Anatomy School’s North Wing, and was charged with providing a resource for solving complex problems by “numerical methods”. On reflection, it would have been a struggle to give it a less assuming start in life. These events, nevertheless, marked the beginning of Cambridge computing.

This week, the Cambridge Computer Laboratory, as the former Mathematical Laboratory is now known, will host lectures and discussions on computing science and the entrepreneurship of its graduates and members, to celebrate its 75th anniversary. The event will salute achievements far beyond those which anyone would have thought necessary, let alone possible, when it was set up arguably as the world’s first Computer Laboratory. In contrast with its humble origins, the Lab today is comprehensively recognised as a world-leader in computing research and boasts large, modern premises, dozens of staff and hundreds of students. The laboratory has given rise to almost 200 spin-out technology firms, some of which have become major success stories in their own right. As such, it sits at the heart of the region’s cluster of high-tech businesses known as the “silicon fen”.

It was where EDSAC, the first programmable computer ever brought into general service, was built, and where microprogramming was pioneered by Maurice Wilkes, the Lab’s second Director, using EDSAC 2. Towards the end of the mainframe age, major advances were made in fields such as networked computing and computer-aided design. Cambridge’s Computer Lab was the home of the world’s first webcam. It was the place where Michael Burrows, the leading computer scientist in search engine development, learned his trade, and where Bjarne Stroustrup, inventor of the hugely popular computer language C++, did his PhD. Without the Lab, early home computers like the BBC Micro, or the low-power chip technology used in iPads and mobile phones, or the Raspberry Pi, might well never have emerged.

How was this achieved? Andy Hopper, Professor of Computer Technology and the current Head of the Lab, puts such accomplishments down to a culture and spirit of innovation which, he believes, has been the running theme of that 75-year history. “Today, the establishment mentality seems to be that you can industrialise innovation, or innovate on demand,” he observes. “You can’t do that any more than you can ask an artist to paint the next brilliant masterpiece. The success of the Cambridge Computer Lab has come about because we created a culture of innovation and nurtured innovative people within it.”

Even the beginnings of the Computer Lab disrupted the norm. When John Lennard-Jones, a Theoretical Chemist who was to become its first Director, submitted proposals for a computing facility in 1936, the very idea would have struck most people as extraordinary. At the time, a “computer” was a person, very frequently a mathematically gifted woman, employed to carry out tedious numerical calculations by hand.

Lennard-Jones’ visionary proposal was for a facility that would carry out complicated calculations in support of wider University research, with the human computers using “recent developments in mechanical and electrical aids to computation”. The Lab’s early hardware consisted of these machines, and two analog computers which were designed to solve linear differential equations.

In the decades that followed, however, the Lab’s role evolved far beyond Lennard-Jones’ own imaginings, and at a pace matched only by advances in computing itself. Much of this took place under the stewardship of Maurice Wilkes, the other inaugural staff member, and the pre-eminent figure in Cambridge’s computing story. Originally, Wilkes had the post of “University Demonstrator” at the Lab. When he returned to Cambridge after service during the war, he found that Lennard-Jones had moved on, and replaced him as Director.

Rightly remembered as a computing pioneer, Wilkes spent more than 30 years in charge of the Lab, transformed it into a centre of excellence, and oversaw many of its greatest triumphs. His era began in 1946, when the Lab still comprised a smattering of mechanical machines arranged on benches. Under his leadership, EDSAC was pieced together in a former dissecting room of the Anatomy School. In the summer, there was an overwhelming stench of formalin, a solution used by the previous occupants to preserve dead bodies for study, which had soaked into the floorboards and vaporised in the heat. It must have been an odd atmosphere in which to give birth to foundational technology.

EDSAC was the first programmable computer to come into general use by scientists. On May 6, 1949, after a sometimes infuriating three-year construction period, it successfully completed its first programmed task by accurately calculating the squares of numbers from 0 to 99.

In the context of modern computing, the technology involved sounds almost laughable. Users prepared programs by punching them on to paper. Finished programs then hung on a line, waiting for machine operators to load them in (the original “job queue”). As academics themselves queued up to use EDSAC, they were thwarted by frequent breakdowns, often having worked into the night. The almost hopelessly complex task of designing the computer’s memory was solved by creating a mercury delay-line system, based on the principle of ultrasonic waves being pulsed through a tube filled with the element. Unfortunately, this sometimes leaked during the filling of the tubes, compelling users and technicians to negotiate hazardous globules of mercury on the floor.

The advances that followed during the 1980s included “UNIVERSE”, which interconnected several Cambridge Digital Rings using the European Space Agency’s Orbital Test Satellite, and demonstrated the feasibility of linking several local area networks on this basis. The follow-up, UNISON, improved the approach with a focus on Email, document transfer, and the exchange of multimedia information in real time.

One famous by-product of this type of research occurred in 1993. A team of researchers working in multimedia systems who shared the same coffee pot had decided to keep tabs on whether it was full or not by using a lashed-up camera to relay a live display to their desktops. An even better system, which emerged that year, was to display the image online through a web browser. The coffee pot thus became the object of the world’s first webcam, and gained a global cult following so large that, when it was switched off in 2001, the world’s media actively mourned its passing.

Many case studies of this phenomenon are discussed in depth by Haroon Ahmed in the pages of Cambridge Computing. The better-known number the likes of Acorn, which became a household name after developing the BBC Micro, part of the Corporation’s nationwide computer literacy campaign in the 1980s. Famously, the contract to do so was won after co-founder Hermann Hauser promised to deliver a prototype within a week, well aware that no such demonstration computer existed. He then assembled a team which successfully built the prototype, completing it five hours before the BBC arrived to sample it.

Acorn was mortally wounded in the home computing market crash of 1984, but groundwork undertaken there on chip design ultimately led to the foundation of Cambridge’s most famous existing spin-out firm. Advanced RISC Machines Ltd (ARM) was set up in 1990 and its technology was picked up by Apple, initially for its hand-held Newton computer system. Today billions of chips are produced by ARM and sold to major clients around the world, featuring in the likes of the iPad and iPhone.

More recent examples of companies founded by Lab members include Real VNC, which commercialised software - the Virtual Network Computer – enabling one computer to take over the screen, keyboard and mouse of another. It became key to remote support for customers in the IT sector and was ultimately licensed for use in Google products, consumer appliances and the automotive industry. In 2008, meanwhile, the charity Raspberry Pi was set up by a team of current and former Lab members to create an ultra-small, cheap computer with the express aim of encouraging children to learn computer science. Founded amid concerns that the number of University applicants for the subject across Britain was falling, it to some extent echoes the achievements of the BBC Micro team at Acorn almost a quarter of a century earlier.