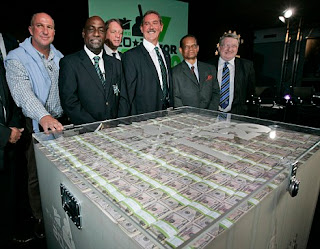 19 years ago, we were told we were so lucky because we now had 5 channels on our television. What a glorious day in the UK when we finally had a fifth channel. I remember, because I couldn't get it and so I had just 4 channels. 12 years ago, I felt so privileged because thanks to the power of the Internet I could make a call across the world and NOT pay for it.  In fact 19 years ago, I would have needed rather a lot of money to be able to share my lessons the way that I did today.

Today I had a student with a virus. Nothing too serious, but contagious and he had to stay at home.  In the old days that would definitely have put pay to any chance of him catching any of his lessons and on top of coming back to school, not quite 100%, (s)he'd have to catch up on a truck load of work that he missed.

However, that's not quite the way it rolls in a 21st century classroom! Thanks to a friend's iPad and his PC at home, he was able to Skype in with video to see my presentation and even interact with me. Then, because the lesson was largely on Google Classroom, he was able to join in and submit work as if he was there.

Then after that we were very lucky to have Eric Cooke from Southampton University come by and because there were people who wanted to be there, but might miss the talk. I naturally, broadcast it to the world using Google Hangouts on Air.  I'd like to think it was an event of world-wide importance, but I did it simply because I could and to top it off YouTube even made a copy for me.

It was only as I was walking home, I realized how far the world has come and how much technology has helped us. I took many millions of pounds worth of technology completely for granted and used it pretty much on a whim.  I can't imagine the justification that would have had to be made to use that kind of tech in my childhood, but here's the thing... We don't have to, if we want to use Video conferencing to connect people half across a city or half way across the world we can.  This is the world that our children live in and the world we as teachers should take full advantage of.

And because I can... Here's the video of Eric Cooke! Great guy with a very provocative and entertaining view of the world!