Minecraft Education is a polished product, but it comes with a premium $5 per user per year.  Each student will need a Microsoft 365 account, so its personal to them.  There's some great features such as shared worlds and a great graphics engine designed for modern PCs and macs. I'd also stress that this is a fully featured PC version of Minecraft with Survival mode and some good features for teacher control.

However, Minecraft on the Pi is free, you just need to update to the latest version of Raspbian. If you already have Pis then you can simply get on and use it! 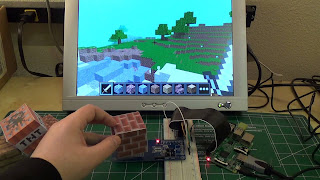 Now at this price if you want a lot of students to use Minecraft then you could actually buy quite a lot of Raspberry Pi hardware to play it on.  The other big advantage is that its the version that lets you use Python to build. If you've got 400 students who you'd like to play Minecraft once in a while then officially you should be paying $2000 for that experience per year.  If you invested that in buying Pis you get a version of Minecraft and so much more!


The costing for this will very much be down to individual schools and their setups. Some will have keyboards, Mice, Monitors that can be used with Raspberry Pis and others will have none of this, but as far as teaching potential is concerned the Pi brings a wealth of creative opportunities including a highly hackable version of Minecraft.

On the other hand if this is an after school club the loss of survival mode will be a big deal for most students and takes away a lot of their fun! Its also possible that students could pay for their subscription, which they will then be able to use anywhere.
Posted by James Abela at 21:18 5 comments: