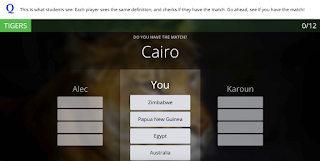 Quizlet has always been able to make flash cards, but with a new generation of competitive quiz systems such as Quizizz and Kahoot it seemed antiquated! Students weren't even prepared to give it a go the last time I gave them the opportunity to choose a system to make quizzes.

This time however we were on Quizlet's home turf! Making Vocabulary cards and using them as a revision tool.  There's a lot to commend Quizlet as a flash card making tool. It's multi-platform, even works on a Windows phone! Much to the surprise of my one Windows phone user!

In the corner was a suggestion that we could play a new live game and ever one who likes to press big buttons. We decided to give it a go!

Unlike Quizizz and Kahoot this is a team game where you compete against other teams. Teams are randomly formed, but if you don't like the make up they can be reshuffled.   I'd also say it's better if you've got portable devices for this. Oddly enough, a computer lab isn't actually the best place to play this, because teams get shuffled frequently.

However that didn't get in the way of most of my students who found ways to dash to each other, grab phones and generally work it out!

The compulsory team element differentiates it from Quizizz and Kahoot, but it also opens up a new type of challenge.  Quizlet have thought it through that for the kind of sets they have this kind of game will work better.  The other point to note is that Quizlet games take a fraction longer to setup.  I've played Kahoots in under 5 minutes, but Quizlet seems to need at least 10 minutes and more than that the first time students play.

In revision season you need all the tools you can get, so I'd strongly recommend Quizlet if you have vocabulary to learn!